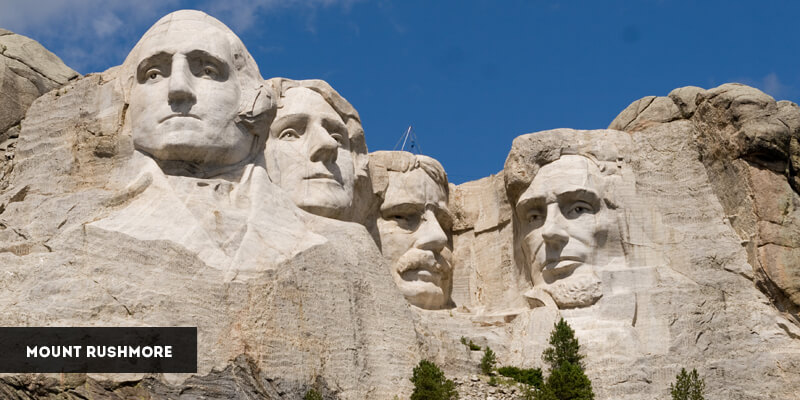 Travelling is fundamental for personal growth as the experience helps a person to not only explore a place but also discover one’s own interests. The continent of North America offers many destinations which can help individuals break free from the mundane routine life and indulge in the excitement of meeting new people, seeing new architecture, connecting with different cultures and learning about a new language. Almost every country on the continent has a tourism department that strives to gain the attraction of tourists from different parts of the world by promoting and preserving the best tourist sites and destinations.

If you plan to travel somewhere soon, do consider the following list of the best places to visit in North America.

If you are a beach lover, brace yourself for this beautiful coastline that will surely take your breath away. Situated along the western part of Michigan, the coast offers some of the most beautiful beaches in the world which are deemed as good as those in Hawaii and California. The shoreline extends to three hundred miles and is marked by sugar-white dunes to relax and soothe its visitors from all the pressures of daily life. Apart from a relaxing swim or suntan, tourists can also indulge in the exciting activity of surfing. In addition, the shoreline is also famous for the most spectacular sunset view which gives it its name – the Gold Coast. It is, therefore, not only a party destination but also lets visitors enjoy romantic evenings. 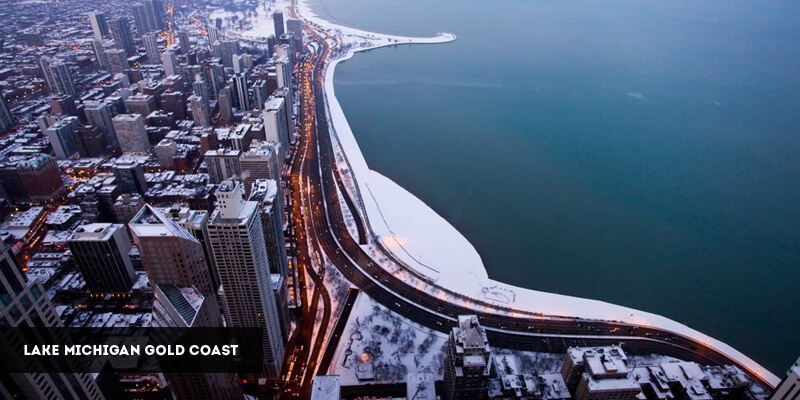 People who believe that there is no vacation without a good beer must visit Michigan’s second largest city, Grand Rapids. It has been voted as the supplier of best beer in the USA. Apart from breweries, there is a lot more in this city for art enthusiasts. It hosts some great art galleries, Art museums and some great Rodin Sculptures in the Frederik Meijer Gardens. It is also the host of the world’s biggest art competition the “ArtPrize”. 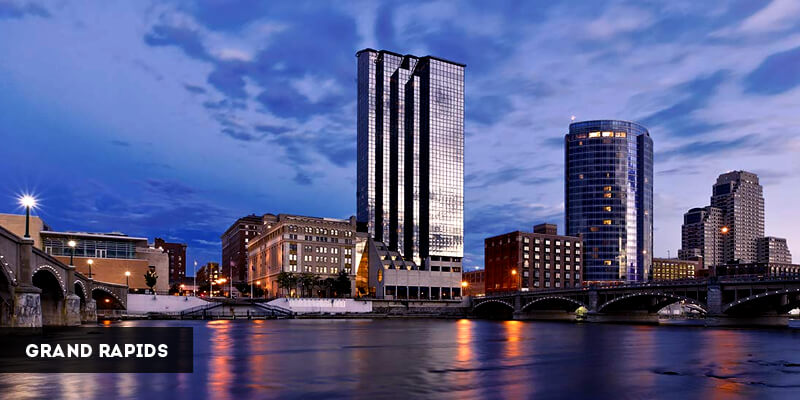 This place is a pure delight for people who love nature and appreciate natural beauty. The National Park is spread across an area of 3,026.87 square kilometers in the central eastern part of the state of California. All of the nature’s beauty is consolidated in this single park including majestic waterfalls, soaring mountains, deep valleys, lush green trees, magnificent meadows and much more. People enjoy hiking up the lofty mountains and rafting in the waters. Visiting this park quenches ones thirst for adventure and sight-seeing simultaneously. 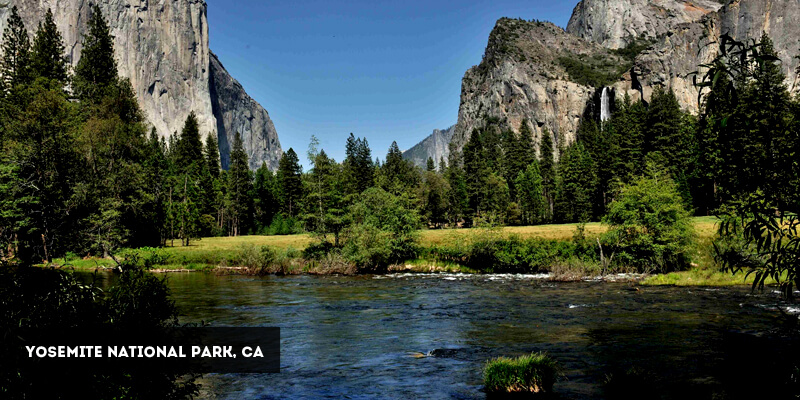 With 18 meters tall sculptured heads of four US presidents, Mount Rushmore is a must visit place for people travelling to North America. It is located in South Dakota. The sculptures are of Thomas Jefferson, Theodore Roosevelt, George Washington and Abraham Lincoln. They were sculpted by Gutzom Borglum. The project began in the year 1927 and took fourteen years to be completed in 1941. This mountain is a unique amalgamation of human skill and natural splendor and is one of the most famous landmarks of the continent.

This is one of the most famous landmarks of North America which is visited by a large number of foreign tourists. This statue, standing on the liberty island of New York, has become synonymous to the city NY itself. It was a gift from the people of France as a symbol of the enlightening of the world through liberty. The copper statue was designed by a French sculptor, Frederic Auguste Bartholdi. The figure of the robbed female in the iconic monument depicts the Roman goddess for liberty, Libertas. 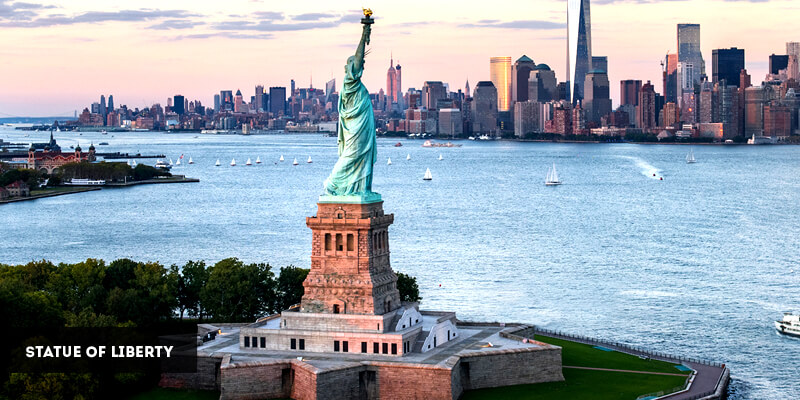 USS Constitution is actually a museum which is a wooden frigate. With the oldest warships in duty (the ship was launched in 1797), this museum is of a great interest for people who are interested in history and the gradual changes in naval warfare. This museum was built in the year 1907. 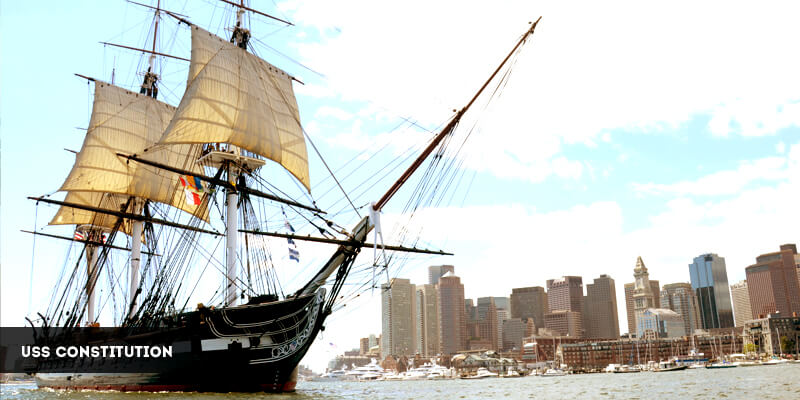 Fort Delaware was built on the island of Delaware River in the 19th century to protect the harbors of Philadelphia and Wilmington. During the American civil war, it was also used as a prison for the prisoners of war by the union. It is a beautifully built fort which proudly displays its historic significance. It is therefore among the best places to visit in North America for those who love history and are fascinated by historical landmarks. 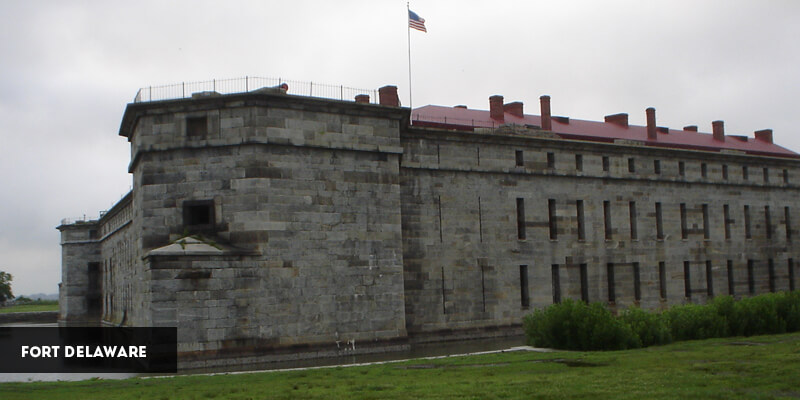 The famous Washington Monument is the world’s tallest obelisk and stone structure. It is almost 170 meters in height and is located to the west end of the Washington mall. Visiting it at night further adds to its grandeur as it is illuminated with lights. People also enjoy the beautiful park that surrounds this magnificent structure within the bustling city. 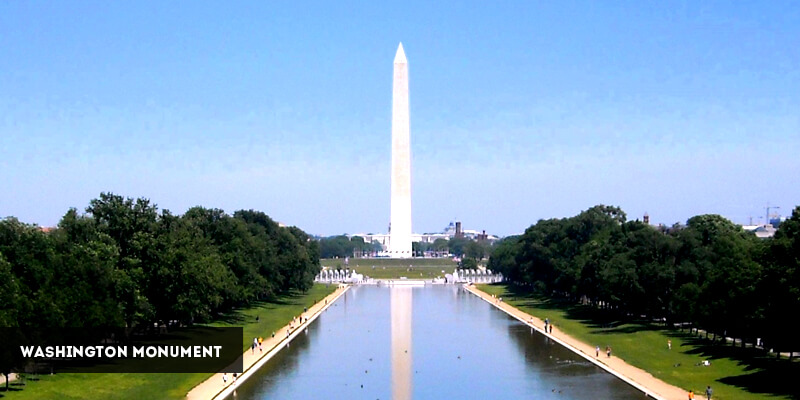 It is considered to be a marvel of the construction and structures of the 20th century. The Golden Gate, over which the suspension bridge has been built, is actually a channel between San Francisco and the Pacific Ocean. The Golden Gate Bridge extends to 1.7 miles and is ranked as the ninth longest suspension bridge in the world. It is a magnificent site for tourists especially for those who are interested in the geniuses of construction and engineering. 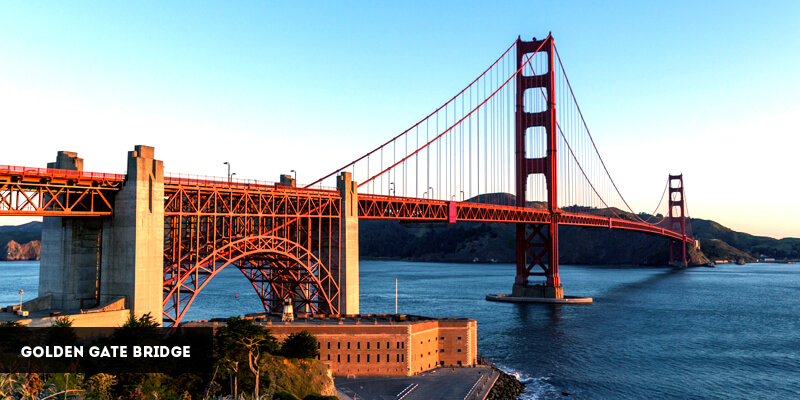 Sears Tower, also referred to as Willis tower, is a magnificent sky scrapper which stands 1,451 feet tall and consists of 108 storeys. Located in Chicago, it provides a beautiful and an expansive view of the city. The sky deck of Sears Tower is a must visit place for anyone visiting Chicago. The building was constructed in 1973. Beating the World Trade Center in height, the sky scrapper held the title of the world’s tallest building for almost twenty-five years. Today, it is the second tallest building in the US and ranks 12th among the tallest sky scrapers of the world. 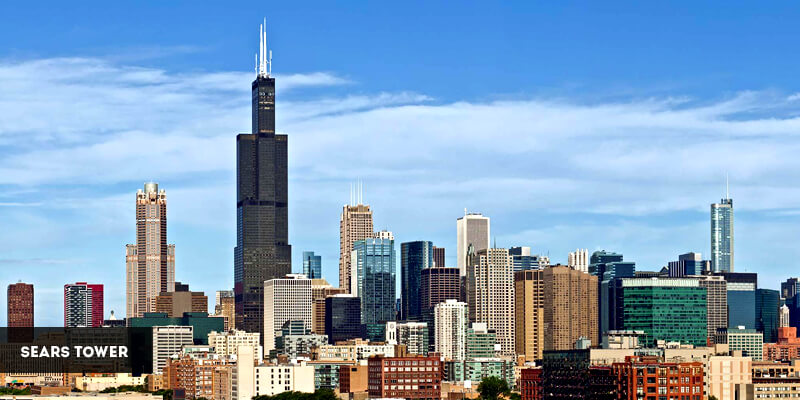 The National Air and Space Museum is a proud host of the world’s largest display of historic aircrafts and space crafts. Located in Washington DC, it spans an area of 161,145 square feet. It is the world’s fifth most visited museum. Almost all of the air and spacecrafts which are displayed are original. Therefore, a visit to the museum is intriguing and enthralling for visitors. 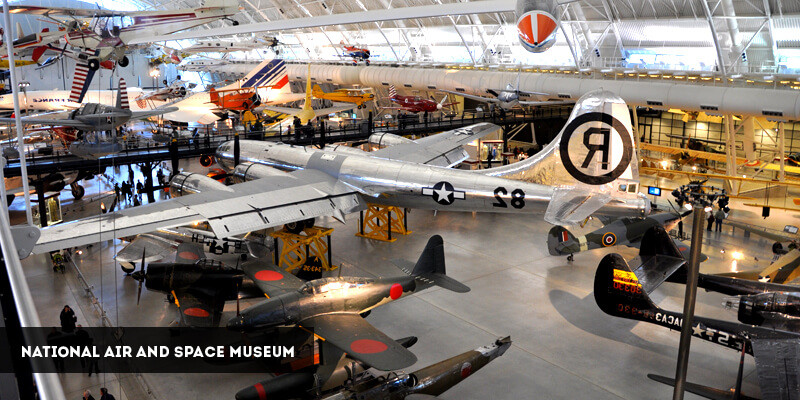 This place is a treat for the eyes. For people who love nature and are interested in flowers and plants, this place is nothing short of paradise. It is a 30 acre wide garden located in Georgia, Atlanta. The Atlanta Botanical Garden maintains a wide range of plants for the purpose of research, education, display, recreation and conservation. It is a must visit place to relax and indulge in the beauty and variety of nature on the continent. 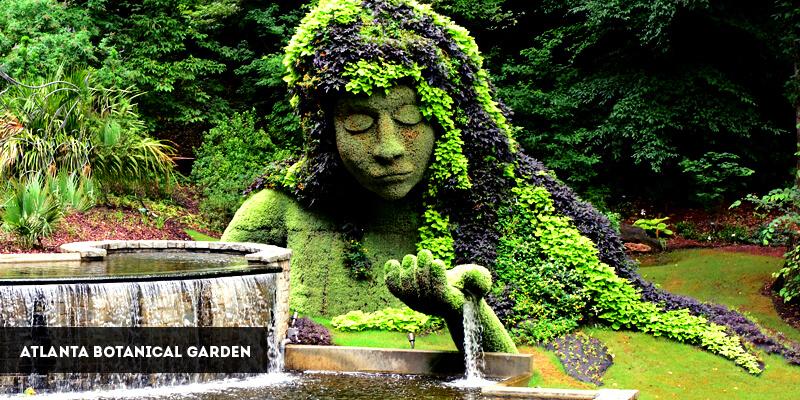 It is one of the most famous places in New Jersey. The spectacular beach attracts millions of tourists during all parts of the year. The shoreline teems with resorts and restaurants which make this shore sparkling and alive. The food is great and so is the natural ambience around the restaurants giving tourists an all-round experience. 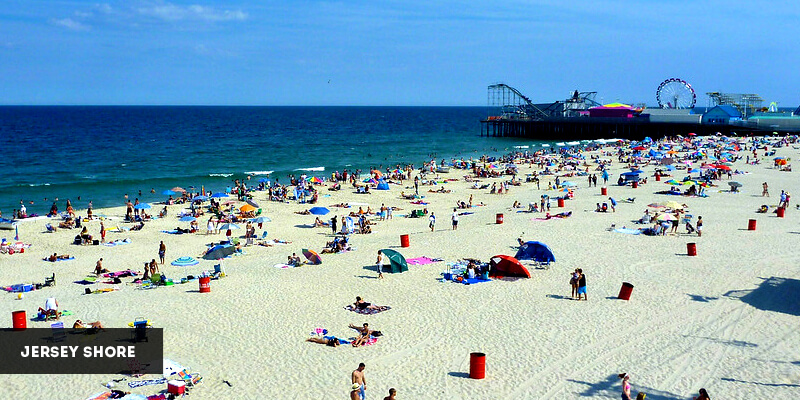 For a quick adrenaline rush, Stratosphere is what tourists hurry towards. The thrill rides on the roof top of the highest free standing structure in the world really drives people to conquer their nerves. Apart from the rides this building hosts, there is also an observatory, a hotel, casino, restaurants, stage shows and a whole lot more. It is a one-stop entertainment for those looking for excitement. 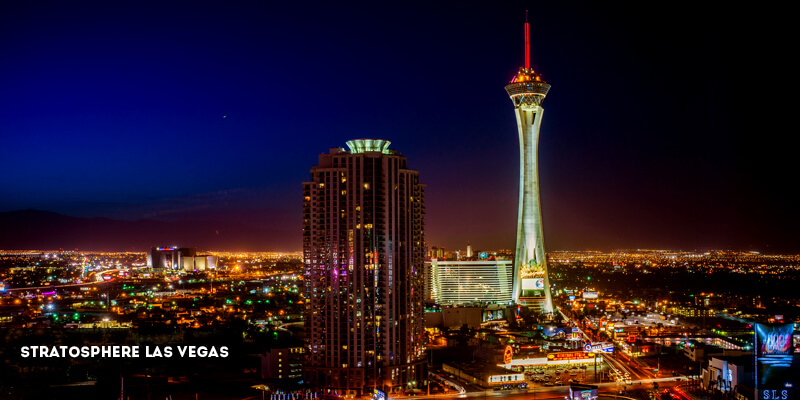 Anyone who wants to unwind in a quiet and a beautiful place and feel close to nature should head to Lanai in Hawaii. With pristine beaches and greenery, it is a speck of paradise on earth. Activities like diving, snorkeling and swimming help visitors enjoy an exciting time. This little island gives you the feeling of isolation from the ever busy and buzzing world.

North America has a lot to offer to the people visiting it from other parts of the world as well as to its local inhabitants. From the finest experience of fine dining to adventurous rides and thrilling landscapes, there is just so much to do. Some of the world’s grandest architectures, oldest museums and cathedrals, artifacts and art galleries, natural parks and gardens, best shopping places and diverse culinary options keep tourists captivated. These wonders make one want to come back to this amazing place again.